The Southern California boys are back in town for the Champions Tour’s Toshiba Classic, as natives Mark O’Meara, Craig Stadler, Dave Stockton and 2012 Allianz Championship winner Corey Pavin have committed to play in the 18th annual event that tees off March 12-18 at The Newport Beach Country Club.

Considered among the crown jewels of the Champions Tour, the Toshiba Classic has set the standard for competitive play, charitable giving and large galleries. Nick Price, 54, won the 2011 Toshiba Classic, kicking off with a tournament- and Champions Tour-record 11-under-par 60 that set the pace for victory.  He became the fourth player in tournament history to finish wire-to-wire en route to a one-shot victory (17-under-par 196).

“We couldn’t be more excited to have this standout group of legendary Southern California players tee it up at the Toshiba,” said Jeff Purser, Executive Director of the Toshiba Classic. “It’s a homecoming of sorts for these players, and it’s a lot of fun to see them in their environment.” 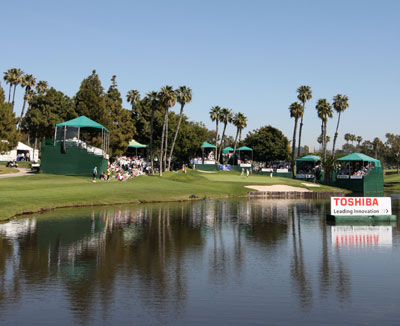 O’Meara, 55, grew up in Mission Viejo and graduated from Long Beach State University. He turned professional in 1980 – a year after defeating fellow Champions Tour player John Cook for the U.S. Amateur title – and would go on to win 16 events on the Tour. He was a five-time winner of the AT&T National Pro-Am, and in the late stages of his PGA Tour career won the Masters Tournament and The British Open in 1998, finding himself at a career-high second on the Official World Golf Rankings. O’Meara joined the Champions Tour in 2007, finding his first win in 2010 at the Liberty Mutual Legends of Golf (with defending Toshiba Classic champion Price), followed by the Constellation Energy Senior Players Championship.

Pavin, 52, was born in Oxnard and attended UCLA before joining the PGA Tour in 1984. Beginning with his first PGA Tour victory that year at the Houston Coca-Cola Open, Pavin would go on to win at least one event a year for the next 10 years, as well as play on three Ryder Cup teams: 1991, 1993 and 1995. He won the 1995 U.S. Open, then the 1996 Bank of America Colonial event, before embarking on a winless decade broken by his 2006 U.S. Bank Championship victory. In 2008, Pavin was named the captain of the 2010 Ryder Cup team and began his Champions Tour debut in 2010 as well. He won his first Champions Tour event this year, when he found a sudden-death victory at the Allianz Championship, defeating Peter Senior with a birdie on the first playoff hole.

Stockton, 70, has long been a staple in the Southern California golf circuit. Born in San Bernardino, he attended the University of Southern California before turning professional in 1964, finding his first PGA Tour win at the 1967 Colonial National Invitation. He’d go on to win the 1970 and 1976 PGA Championships, as well as play on the 1971 and 1977 Ryder Cup teams. In 1991, the year he joined the Champions Tour, he served as the captain of the Ryder Cup team, and would collect Champions Tour victories at the 1992 and 1994 Senior Players Championships as well as the 1996 U.S. Senior Open. The renowned putting teacher currently resides in Redlands.

Stadler, 58, took the San Diego golf scene by storm as a youth, first at La Jolla High School and then as a collegiate player at University of Southern California. He won the 1973 U.S. Amateur Championship, turning professional in 1976 and winning his first PGA Tour events in 1980 – the Bob Hope Desert Classic and the Greater Greensboro Open. He’d go on to win the 1982 Masters Tournament, one of four events in which he was victorious that year, following that up as a member of the 1983 and 1985 Ryder Cup squads. Stadler joined the Champions Tour in 2003, amassing eight victories between 2003 and 2004 including his first senior win: the 2003 Ford Senior Players Championship. He was the Tour’s leading money winner in 2004.

The Toshiba Classic’s lead charity and operator is Hoag Hospital Foundation, and the 2012 tournament will benefit the Mary and Dick Allen Diabetes Center at Hoag for the second consecutive year. The Toshiba Classic has generated more than $14 million for charity in the last 14 years, the most on the Champions Tour. Hoag Hospital Foundation also received the inaugural PGA Champions Tour Charity of the Year Award in 1998.

Tickets for the Toshiba Classic are on sale now, and run $20 if purchased in advance of tournament week or $25 at the gate. Season patron badges cost $100, which provide week-long grounds and clubhouse admission for practice rounds and the tournament. Daily tickets providing grounds and the clubhouse are $40 per day. Visit www.toshibaclassic.com to purchase, or call 949-660-1001 to secure corporate packages.