A Day in the Life: Gregg Schwenk 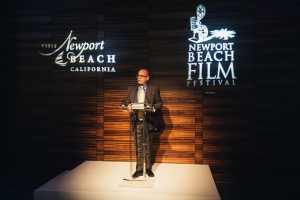 The Newport Beach Film Festival co-founder takes us behind the scenes of the 16th annual event, revealing his daily grind and how he strives to find balance during his busiest season.

“There are a few things I am really excited about this year,” Gregg Schwenk says of the upcoming Newport Beach Film Festival (April 23–30, at various locations throughout the city). “Our opening night film, ‘The Water Diviner,’ is director Russell Crowe’s directorial debut,” says the local and co-founder of the NBFF. “It’ll screen at the the Lido Live theater and will be followed by an amazing after party at Fashion Island — we’ll have 20-plus local restaurants offering tastings of their signature dish as well as cocktails, beer and a private performance by Cirque du Soleil.”

Equally exciting for Schwenk are the upcoming screenings of “Slow West,” an American-British thriller western directed by John Maclean and starring Michael Fassbender, and “A Little Chaos,” a British period drama in which two landscape gardeners (Kate Winslet, Matthias Schoenaerts) compete to design a fountain at Versailles for Louis XIV (Alan Rickman).

“We received well over 3,000 films,” Schwenk says, of which 350 were selected for the festival. Fifty countries will be represented this year. “Each film is reviewed five times, and ranked and rated among members of our team.” These volunteers are among 1,000 who put together this spectacular event. “I’m extremely proud of how far we’ve come in 16 years,” says Schwenk, also noting that NBFF is one of the fastest growing festivals on the West Coast. It’s one of only five in the world that makes Variety’s “10 to Watch.”

We catch up with Schwenk who tells us what “a day in the life” is like leading up to the festival. “A day now is radically different from a day in June for me,” he says, as he prepares to welcome 55,000 or more film lovers to his annual event.

By 7AM: We have a lot of partners on the East Coast and in the U.K. this year, so I wake up and spend an hour at home making calls and writing emails. Then I like to go to either Kean Coffee (for the mocha and bread pudding) or Haute Cakes Caffe (I always order the Pierre’s Scramble) to have breakfast and work from my laptop and cell phone.

9:30AM: At the office, I have a litany of meetings this time of year — seemingly one right after the other. This morning I met with staff about our seminar series, which covers programs and events that are free to the public (look for free screenings of three film classics this year at The Dunes); our Shorts programming team (we are one of the largest film festivals in the U.S. for these films that are under 40 minutes long; and our business development team to talk about sponsorships (the festival is a unique opportunity for our partners to interact in an entertainment setting in O.C.).

2PM: Nowadays I have a lot of lunch meetings. One of my favorite places to take clients is Andrea or Pelican Grill at The Resort at Pelican Hill — it’s a great place to impress partners and everything on the menu is outstanding. Another favorite is Bamboo Bistro in Corona del Mar (try the fresh coconut and lemongrass chicken).
If I have a moment alone and can break away at lunch — which is rare — I like to take advantage of the amenities we have here in Newport Beach, one of them being the Newport Aquatic Center. Sometimes my fiancée will come and meet me for some kayaking and stand-up paddleboarding. We also like to have lunch at Café Jardin in Sherman Gardens, which is very peaceful and beautiful and has amazing food. I usually try whatever special they’re offering.

3:30PM: Back at the office, I have follow-up meetings with key staff members, and phone calls and teleconferences with studios in Los Angeles. There are interviews with TV and radio and print media — between one and three a day during festival season. We have programming meetings to narrow film selections and placement. We have technology meetings to ensure that everything is running well and that we are screening to the highest possible standard for the filmmakers and audience. Our operations team finds opportunities at various venues — we put on about 20 events throughout the festival, from 200-person receptions to 2,000-person galas. There’s such a range of activities and events, and there are so many moving pieces at all times. Our staff works so hard to ensure that everything is running perfectly and that every event as a “wow” moment.

7PM: At home, I’ll have a light dinner — usually takeout. I am a very good eater but a very poor cook! During the week I don’t dine out often, but I like to pick up something from Red O Restaurant or Sol Grill and take it home.

8:30PM: I am back on the computer and checking work. I’m also an adjunct professor at Cal State Fullerton, where students are usually emailing me and asking me questions, so I’ll answer those. This is also my time to tend to personal emails.

10PM: When work doesn’t take up every hour that I am awake, I like to unwind with a class of wine (Chateau Montelena is my favorite, though I just tried Page wine from Napa and really liked that as well) and watch TV or a film. I typically watch between two and six films a week. My shows of the moment are “House of Cards,” “Game of Thrones,” and recently, I picked up “Downton Abbey.” When it comes to films, I’m a sucker for documentaries — life is far stranger than fiction. I also love the classics. This year my favorite films were “The Imitation Game,” “The Theory of Everything,” and “Whiplash.”

On the weekend: My fiancée is a big advocate of yoga and always tries to get me active in that — I perform poorly but she keeps encouraging me so I keep trying! If I am not able to kayak during the week, I’ll make sure to do that on the weekends too. I am also fortunate to have my parents here, and love spending time with them. They have a small antique store called Old Newport Antiques, and I like to go help my dad there.
And, there’s always a film or festival event that we are engaged with — Sundance, Toronto, Turner Classic in Los Angles. I’ll go to these events for inspiration and to network with people in the film industry.