Want to attend one of the leading lifestyle film festivals in the United States? Screen the most anticipated movies of the year? And see filmmakers and celebrities walk the red carpet? Then, look no further than the Newport Beach Film Festival. 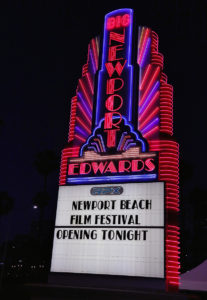 In its 19th year, the Newport Beach Film Festival runs April 26 – May 3. It will bring the best of classic and contemporary international filmmaking to Orange County. This year, more than 55,000 attendees will screen 350 films from more than 50 countries over the course of eight days.

Highlights of the festival include the opening night screening of American Animals and a Fashion Island gala. You don’t want to miss the Newport Beach Film Festival’s Honors Awards either. Top moviemakers and stars will applaud this year’s greatest contributions to the big screen. Finally, the festival will finish with the closing night feature All Square.

Renowned for its worldwide impact, the Newport Beach Film Festival screens unexpected films often overlooked by other festivals. Many of these movies have gone on to critical and commercial acclaim.  Paul Haggis’s Crash (2004), which unflinchingly explores racial tensions in Los Angeles, provides a perfect example.

Crash debuted at the Toronto International Film Festival in September 2004. But, afterward, few festivals opted to screen it. Fortunately, the Newport Beach Film Festival’s co-founder and executive director, Gregg Schwenk, and his creative team believed in the movie. In 2005, Newport Beach highlighted Crash as the festival’s opening night feature. The gamble paid off. Crash went on to great critical acclaim and three Academy Awards.

So, what should attendees look for in this year’s line up? According to festival organizers, “The official program is rounded out nicely with a slate of powerful documentaries that cover a wide range of topics—from the war-torn country of the Democratic Republic of Congo to the fight for equal pay and representation for women in Hollywood.”

Festival organizers have also added a delectable film category to this year’s screenings.  “New to the festival this year is the culinary section… featuring films about all different types of cuisine. One thing is for sure—you’ll leave the theater satisfied with the film and with a hunger to try new foods.”

Besides the addition of the culinary section, prepare to crack up. “Expect big laughs while attending this year’s festival. More than any other genre this year, the comedy shines through in both our spotlights and narrative features programs.”

Despite the changes, the festival remains close to its original mission. It offers the finest in new, local, international, and critically acclaimed cinema from all over the globe. And it provides a forum for cultural understanding and enriching educational experiences.

Since 1999, the Newport Beach Film Festival has presented award-winning films. These include Crash, The Cove, (500) Days of Summer, The Waitress, The Illusionist, Spellbound, and more. The festival has honored many Hollywood notables. Their ranks include Aaron Sorkin, Robert Wise, Haskell Wexler, and John Waters.

Check out this year’s line-up to see who made the cut. No event brings cinematic magic to life quite like the Newport Beach Film Festival. Make this your year to get in on the action.