It’s time to get excited about Orange County’s annual celebration of cinema. To help you plan, here’s a taste of what’s coming up at the world-renowned event—from special activities to films and much more.

The Newport Beach Film Festival (themed “Go Deeper”) marches into its 18th year with a diverse collection of studio and independent films from around the globe that are sure to make it one of the strongest events to date. The festival experience allows attendees to “go deeper” with the films, with access to filmmakers, actors and others involved in the internal filmmaking process.

Scheduled for April 20-27, this year’s festival features more than 350 films from 50 different countries shown at The Lido Theater, Island Cinema, Edwards Big Newport and The Triangle Cinema. Attendees also can expect nightly special events, red carpet galas, compelling conversations with filmmakers, international spotlight events and seminars, as well as opportunities to mingle with celebrities, filmmakers from around the globe and film industry professionals in a beautiful seaside setting. 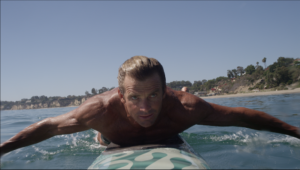 Take Every Wave: The Life of Laird Hamilton

Look for world, North American and U.S. premieres — along with films boasting O.C. connections — including “The Long Way Back”; “Don’t Tell”; and “Score: A Film Music Documentary”; and “Paris Can Wait.” Several events also will take place during the festival, including the Opening Night Gala April 20 at 7:30 p.m. at Big Newport Theater, featuring a red carpet screening of the film “TAKE EVERY WAVE: The Life of Laird Hamilton,” the remarkable story of the American icon and innovator who changed the sport of big wave surfing forever. A special treat? Laird and his wife, model and professional Volleyball player Gabrielle Reece, will be in attendance. That’s followed by the Opening Night Gala at Fashion Island from 10 p.m.-1 p.m. with tastings from more than 30 of O.C.’s top restaurants ($175/$225).

With 50,000 people expected to attend this year’s festival during its eight-day run, local hoteliers including the Island Hotel, Hyatt Regency Newport Beach and Marriott Newport Beach also have been working in partnership with the festival to create some special accommodations.

For more information about the Newport Beach Film Festival, along with a complete schedule of films and events, visit newportbeachfilmfest.com.